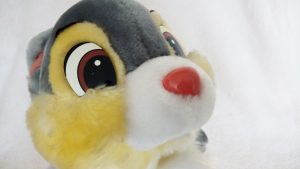 This is a Thumper from the Walt Disney World park. 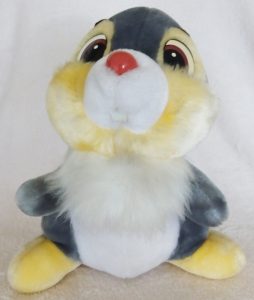 It’s a large plush that’s about 26 cm big. He is in a standing position. He is made from a soft fabric with a short pile and has a tuft of long hair on his chest and for a tail. His cheeks also have a longer hair, but not as long as the chest hair and tail. His eyes and nose are hard plastic buttons. His teeth and eyebrows are of a thinner, felt like material. 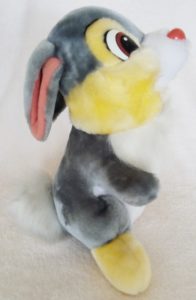 He has a large triangular base with a thick tail and his feet spread, which makes him easy to stand. The plush is very stiff and well stuffed. This gives it a firm shape. 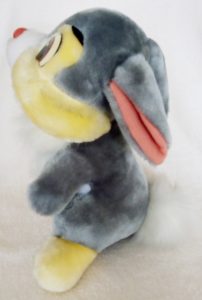 The proportions of this plush are slightly off though. His limbs are too short and stubby, and his cheeks aren’t as puffy. He is a bit simple of nature, and doesn’t capture all the details of his animated counterpart. 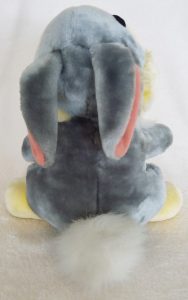 The colours are also off. He is a very dark blue grey, with yellow feet and face and white belly, nose / muzzle and tail. The pink for his nose and inside of his ears is also very dark. Thumper in the movie is of a much lighter grey, with a light brown belly, feet and face. 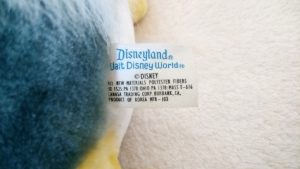 He has a lovely thick fabric tush tag located on his butt. It has the words Disneyland® and Walt Disney World® on it in blue, with the copyrights, material and where it is made under it in black. There is nothing on the back.

I never owned the movie of Bambi as a child, but my aunt did. So whenever we were there I watched that VHS. Thumper was my favourite, but then again, I grew up with nijntje, my favourite plush was a bunny and I owned a pet rabbit, so bunnies were high up there.

I found this guy in a charity shop for cheap. Due to the hard plastic eyes and nose I’m thinking it’s pre-90’s. Nowadays they no longer have these for child safety reasons.

These plush are now considered “vintage”, and it has that typical vintage look to it. Simple in nature, with hard face features, stiff stuffing and dark colours there is just something cool about these.

Although in great condition for its age, sadly its left eye has some sun damage and has turned yellow. There is also a small scratch here and there on its eyes and nose, but these are hardly noticeable.

During the Easter period I have him displayed in the house, as I like my holidays geeky themed.

Although not my favourite Thumper plush out there, I do like his age and have a weak spot for 80’s and 90’s stuff, although he may be older than that. If anyone knows his exact age, do send me a message!