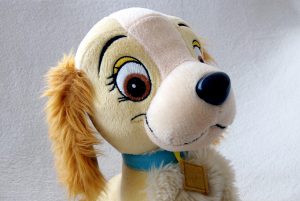 Series: Lady and the Tramp

This is the sweet Lady of Lady and the Tramp. An European plush, possibly a mirage amongst collectors. 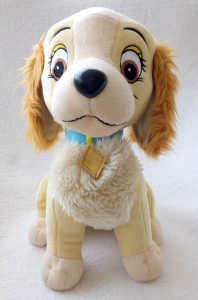 This Lady plush is a nice size at 30 cm high. Its pose is rigid and sculpted, but the plush remains soft. Its eyes are fully embroidered and the nose exists out of a hard, black button. Her chest, ears and tail are made of a softer material with a longer hair, giving it a fluffy look. 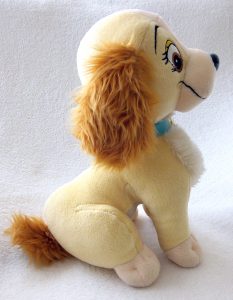 She is in a upright, sitting position, which makes it great for displaying. Because of her rigid sculpted body she has no problem sitting up. The proportions are quite good, although she has a slightly bigger and rounder head than her animated counterpart. The collar and badge are made of fabric as well.

The plush has more pastel colouring than Lady in the movie. It gives her quite a soft look. 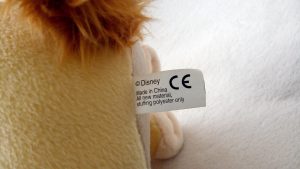 The tush tag is very general. It doesn’t list a company, simply © Disney and the CE Marking.

I always loved Disney, plush and dogs. So a combination of all 3 is of course amazing to me. My mom found this one on a second hand market somewhere.

Not much is known of this plush though. It could be a China counterfeit, a bootleg or “bootie” if you will. However, it has the CE marking, which means it went through some control which usually doesn’t happen with the Chinese knock-offs. I also never saw another one of these, so it may not have been mass-produced, which again, Chinese knock-offs tend to do.

Back in the early nineties, at the height of the Pokémon craze, a lot of places wanted to make money on Pokémon merchandise, and licenses to create toys were handed out to so many companies, Nintendo even lost track of who had them or not. A similar thing happened to My Little Pony. These (more than likely) unofficial plush/figures, made on a very small scale, are now scattered throughout the world and highly sought after. In the My Little Pony collector world, these are called “Nirvana”. In the Pokémon collector world “mirage”. I don’t know if Disney has an equivalent with a similar story? There is tons of Disney stuff out there!

I love the Disney animals, especially the Disney Dogs. So Lady is pretty high up there. However, I rather have plush I know more about or are “official”, and that look closer to their animated part, so I’m selling this beauty. (I hope I don’t end up regretting this!)

I still wanted to catalogue her here for fellow collectors. The photo’s are, as always, of the actual plush in hand and not stock photos.