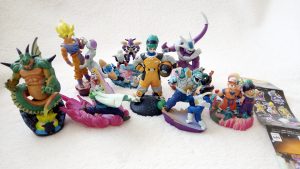 This is a gashapon series from MegaHouse from 2006. The series was titled Frieza Returns. If you bought a complete set in a box you would find 7 plastic Dragon Balls and each ball would contain one of these figures / dioramas with an extra piece. All these pieces would form an extra 8th figure / diorama.

Each figure would come with a little leaflet that would portray the set.

A bonus 8th figure could be made when all 7 were collected. 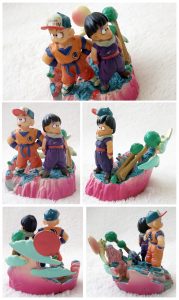 This figure portrays the arrival of Krillin and Gohan on Namek. As Bulma is checking the oxygen levels of Namek, Krillin and Gohan are already outside admiring the view. The diorama depicts Krillin and Gohan looking around with a little Namekian backdrop, that is skewed to give the sense of depth and perspective. The base is a 5cm circle and the entire figure is about 6cm at its highest point. 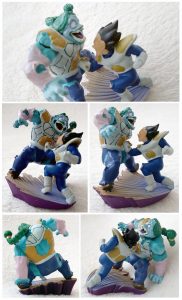 This figure portrays the fight of Vegeta VS Zarbon. This is their rematch, as Zarbon has transformed into his second, uglier form, yet Vegeta still beats him. This diorama portrays Vegeta puncturing Zarbon’s armour and stomach, right before the final blow / beam. The base is a whoosh of lines, to add to the dynamic of the punch, common in anime. The base is a 6cm at its widest and the entire figure is about 6cm at its highest point.

This figure portrays Bulma in a space suit. It shows her preparation to go to Namek, and she is ready and determined to conquer space. She stands on the universe, with a couple of planets. The base is a 5cm circle and the entire figure is about 8cm tall.

This figure portrays the fight of Goku Super Saiyan VS Frieza. This is at the start of their full fight, as Krillin has just cut of Frieza’s tail and been killed for it, and Goku has turned into a Super Saiyan. As Frieza wants to kill another of Goku’s friends, Goku intervenes and grabs his hand. They are standing on Namekian rocks. The base is a 6cm at its widest and the entire figure is about 10cm at its highest point. 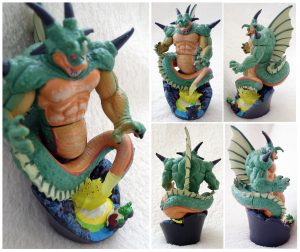 This figure portrays the summoning of Porunga by Dende. Porunga is the Namekian Shenron and can only be called in Namekian, hence Dende helps the Earthlings to summon him. The base is a little Namekian backdrop, that is skewed to give the sense of depth and perspective, and dark all around as it turns dark when the Dragon is called. Dende is also dark from the back to create a sense of light and a cool silhouette. The base is a 6cm at its widest and the entire figure is about 9cm at its highest point. 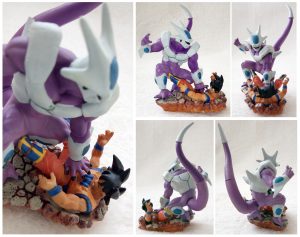 This figure portrays the battle of Cooler VS Goku. Cooler is in his final form and crushing Goku in this scene. The floor exists out of rocks, with Goku being pushed in it. The base is a 7cm at its widest and the entire figure is about 11cm at its highest point, making this the tallest figure of the set. 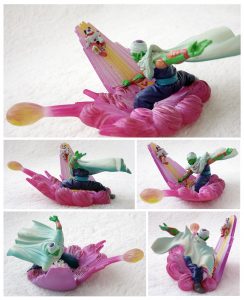 This figure portrays the battle between Piccolo and Frieza’s second form. Frieza blasts at Piccolo but Piccolo deflects it and counter attacks while Gohan, Krillin and Vegeta watch from the side line, as seen in Episode 81. The figure shows the deflected blast off to the side, with Piccolo in a mist of smoke having just deflected it, and Frieza in the distance in shock. The base is skewed to give this sense of depth with a tiny Frieza. The base is a 10cm at its widest, making it the widest figure of the set and the entire figure is about 5cm tall. 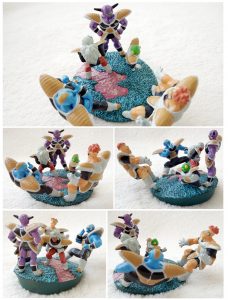 This figure portrays the Ginyu Force. All 5 members are present and in discussion on a circular base of Namekian floor. The base is a 6.5cm circle and the entire figure is about 6cm tall.

I loved Dragonball Z from the start as an early teen but there was so little to find back then. Then the internet became a thing and before I knew it I had discovered eBay! I bought loads of full sets, including this one.

I liked the little diorama’s. They were so different from the standard action figures Europe seemed to have. They were nice to display and look at, and the perspective tricks I found cool.

Later I found them a bit annoying, as often they only looked good from one angle, and I like a figure because of its 3D quantities. So when I started downsizing my Dragonball collection it wasn’t that hard to let these go.

I also didn’t like MegaHouse. This was the only set I owned from it, most other Dragonball merchandise being Irwin or Bandai, and I found the quality lacking. Over time, I experienced plastic fatigue and bits broke off, from merely being on display! The trees broke from the Krillin & Gohan set, as can be seen on the images, and cooler broke at one point as well. The figures were also extremely fiddly to put together, and seemed easily bent and therefor hard to put in place. The paint I also found sloppy.

Lately I also find my Dragon Ball purchases gravitating to more mundane poses rather than the fighting ones. It’s like there is too much power fighting / stances in the Dragon Ball world. My favourite Akira Toriyama drawings are also the ones you hardly see in the show itself, and portray more mundane actions. So I did like the Bulma figure, or Krillin and Gohan on Namek, but it wasn’t enough for me to justify keeping the set.

Surprisingly to me though, there are some hardcore MegaHouse collectors out there and the set sold rapidly with 3 people fighting over it, despite the broken bits (which could easily be glued, mind). Of course it reflected in price as well so maybe some wanted to fix it and considered it a bargain.

Overall, I think this just wasn’t for me. But I still wanted to catalogue the set here for fellow collectors. The photo’s are, as always, of the actual figures in hand and not stock photos.

Got any more details / information you think I should add? Or did I get something wrong? Do you own the same set? Do you agree or disagree with my findings? Let me know in the comments below!