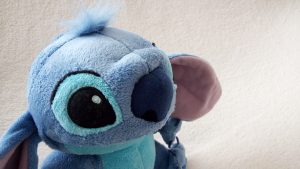 This is a Stitch from the Walt Disney World park in Florida. 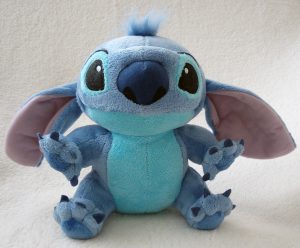 It’s a small plush that’s about 20 cm big. He is in a sitting position with all paws sticking out to the front and his ears are hanging low. He is made from a soft fabric with a short pile and has a little tuft of long hair on his head. His face features are embroidered. There is a stiffener in his head to keep his face moulded. 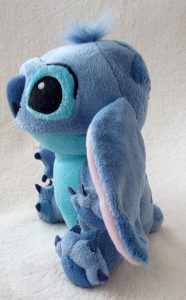 His proportions are way off. This Stitch is about 2 heads big, which makes this more of a chibi Stitch. His legs and arms are short and stubby, which makes the overal plush look a bit chubby.

He has plastic pellets in his body, which makes him easy to sit and squishy to cuddle. His colours are of the Stitch from the TV series, a lighter blue than the movie Stitch. 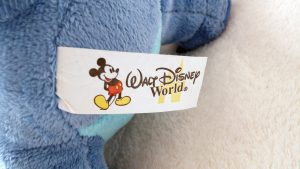 My mom found this cutie in a charity shop and bought it for me knowing I like the blue space dog.

However, he is not my favourite (Stitch) plush. I’m not a big fan of “teddy” posed characters (sitting with paws sticking out) nor characters that are out of proportions from their original design.

Still, it is a Stitch, and an official Disney World one to boot, so I’m not complaining too much. He sits proudly with my other Stitch. I do love his silly expression…