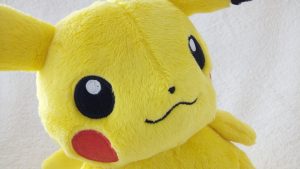 Possibly the softest, cutest plush there is of Pikachu. This Pikachu of Takara Tomy has floppy paws, a floppy tail and floppy ears. 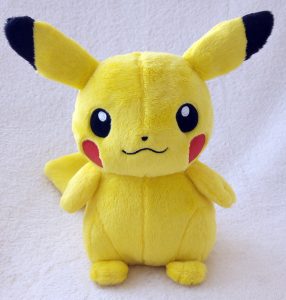 This Pikachu stands 20 cm tall to the tip of his head and has beans in his butt for balance. It has the iconic colours of the anime Pikachu and embroidered features. It has a closed “3” mouth. 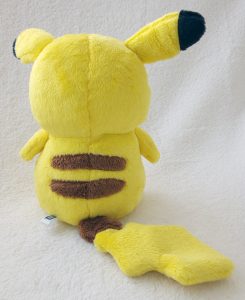 It has a fairly ‘modern’ look to Pikachu, with a slim body. It’s proportions are chibi like, its head is the same size as its body. 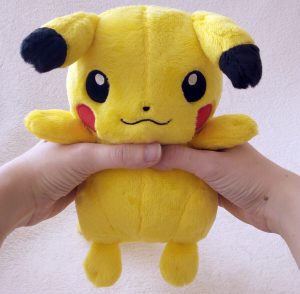 It’s paws are thin and only attached by a very flat size, so it’s very floppy. Picking it up reveals how floppy all the extremities are, which makes it adorable looking. 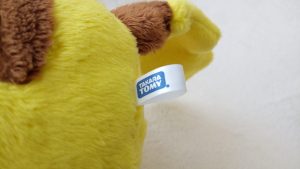 It does not have a hang tag and the tush tag is small and simple. It has the Takara Tomy logo on one side and copyrights on the other. 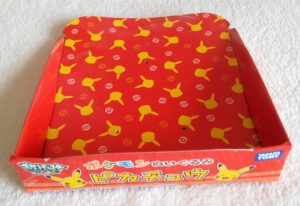 It comes on a cardboard stand that is red and has a pattern of Pikachu faces over it. It only has a front side, with Japanese text and Pikachu faces on either side. 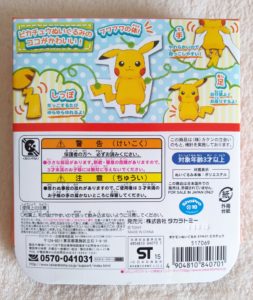 On the bottom it showed how all the limbs are floppy.

Possibly the cutest Pikachu plush I own. I saw it for the first time in a Pokémon Facebook group post, where someone held it and called it a ‘baby Pikachu’. I searched until I found it and showed my boyfriend, who bought it for me the following Christmas.

Since then it has been with us and affectionately been called ‘Flopsychu’. I absolutely adore this plush. Although I usually don’t like body designs of Pikachu that stray from the original, somehow this Pika gets away with it. The cute floppyness just makes up for the modern look.

It is also extremely soft! Although not super fluffy, it has a bit of a longer hair than the smoother fabric plush.

They released several others, including an Eevee with this Pikachu, and the Starters of the Sun & Moon Generation when that game came out. They now also released a Bewear, Mimikyu and a new Pikachu (24 June, 2017) with Ash’s hat from Sun & Moon, and an open mouth instead of a closed one. I don’t know if these others are just as floppy as this Pikachu, but I bet they are just as soft.

I highly recommend this plush. It’s soft, cuddly and cute. It’s Takara Tomy as well so you know the quality is great too.

Got any more details / information you think I should add? Or did I get something wrong? Do you own the same plush or others from this range of Takara Tomy? Are they also just as floppy? Do you agree or disagree with my findings? Let me know in the comments below!