The Tea Cup Time figures are small figures of Pokémon that fit in a Pokémon themed tea cup, that were distributed in gashapon machines in various series of 5 figures. They are made by Bandai. This is the second series. 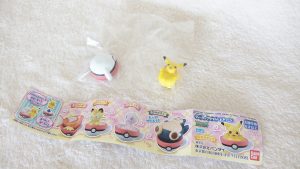 They are distributed in a Gashapon machine, so it will be random which one you get. It cost ¥300 per play. Inside the Gashapon ball you will find the Pokémon, the tea cup and the leaflet. The figures are in plastic.

The second series has Pokéball themed tea cups. Unlike the first series which were completely white, these are coloured with the red top and black line in the middle. It only features Gen I / Kanto Pokémon.

I only have Pikachu of this series. 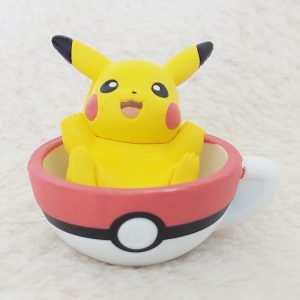 The full figure, so in cup, is about 3.5 cm high. I like Pikachu lounging in his cup, but he can also sit in it upright. 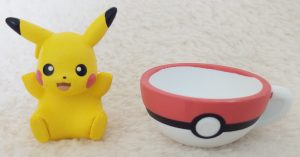 As you can see, the figures can be separated (in fact there is nothing attaching them together!). So if the theme isn’t your cup of tea (ha!) you can use the Pokémon figure separately. It’s a cute and small figure that is surprisingly detailed and accurate for its size. 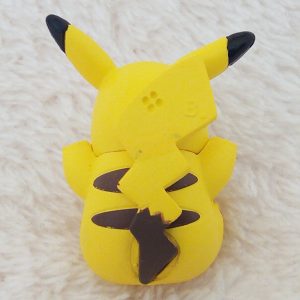 On the back of Pikachu’s tail is the branding. It has the iconic 4 dots in a diamond shape of Bandai, as well as a B. The cup has no branding.

I love Gashapon series as they are so cute and tiny. And yet despite their size they are incredibly detailed and well made, which is typical for Japan. They are also “cheap” as it costs only a couple hundred yen to play, which is the equivalent of 50p~£2 / 50ct~€2.

It’s randomness means it may be hard to get a full set though, so collecting full sets can be expensive, but doubles can often be traded or sold. It’s also sometimes better to buy a full set online.

Having said that, most of these cool ones are only available in Japan, so shipping / importing these quickly makes these “cheap” figures rather expensive. I often see these sold for around £7+, which I find too much for them considering their cost price.

However, I don’t mind paying more than £2 as I do understand the import costs, and I bought this Pikachu for £4 in an anime shop in Newcastle, UK.

I have a passive interest in this serie (tea is not my thing) and a single figure displays just as nice as a full set, so I only bought Pikachu. The figure is incredibly cute though!

If you like gashapon or small figures, these series are really cute and easy to collect (not too expensive in general), and a good recommendation.

Got any more details / information? Did I get something wrong? Do you own the same figure? Let me know in the comments below!