The Pocket Monster Collection, MonCollé or simply Tomy figures are small figures that are highly collectable. The series has been running from the 90s and is still running now. They have been distributed worldwide and have seen various releases and re-releases in various packs. They come often in “toy sets” and are therefor generally found in generic toy stores and supermarkets instead of the more niche geek shops. In Japan these figures come also in stand alone packs.

In this blog post you’ll find all the Gen VII / Alola region Pokémon I own. As my favourite are from Gen I, with a couple of Gen II, you won’t find many here. Most were acquired due to it being in a multipack, and although I don’t collect these, Tomy figures are cool and I’ve decided to keep them for now.

The Tomy figures of Pokémon are my favourite. I’m still trying to catch them all of Gen I, and some of my favourites of Gen II that I have a soft spot for. I don’t have much with Gen VII, but have acquired them due to them being in multipacks with Gen I Pokémon.

The figures I currently own are below. All photo’s are my own of my own figures and no stock photos were used. They are shot in natural light, mostly right after sunrise and right before sunset or on a cloudy day, to avoid harsh light and shadows. These are all in perfect condition as they came new out of packs. 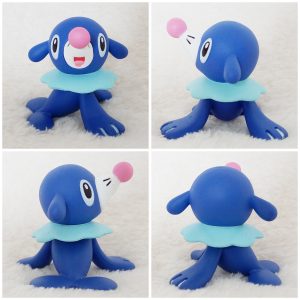 This Popplio came in a Versus toy pack with Pikachu in a Thunder pose from the Sun & Moon series which I purchased in 2018 in the UK. It is a matt figure.

The branding is on its bottom in raised font and says © Nintendo / Pokémon TOMY. 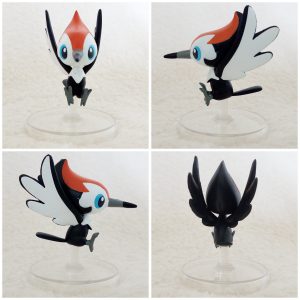 This Pikipek came in a Versus toy pack with Clefairy from the Sun & Moon series which I purchased in 2018 in the UK. It’s a matt figure that feels rubbery, and is therefor slightly flexible. It also comes with a see through stand that can be taken off. 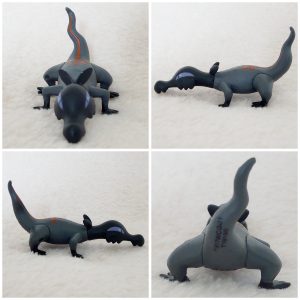 This Salandit was released in 2017 and came in a Versus toy pack that included Pikachu doing the Z-move pose from the Pokémon Sun & Moon line which I purchased in 2018 in the UK. It is a matt figure.

The branding is on its bottom and has in raised font ©2017 The Pokémon Company International / Nintendo. TOMY CHINA EX2 5AZ, UK. Printed in black on the bottom of his tail it reads F1917WCG01 T19180.

I do find the first release from the 90s still the best. They look so unique with their airbrushed look and high gloss. It gave it more of a watercolour look which is closer to Ken Sugimori’s art. Over time, the Pokémon started to look more like their animated counterpart rather than the game, and the game itself started to look more like the animation as well. The figures lost their nice gloss, and feel cheaper because of it. I even feel their paint jobs are getting worse. Still, I love them, but it made me feel less in love with the later Generations.

Because Pikachu is often paired with other Pokémon, I end up with Pokémon from different Generations that I care less for. With Sun & Moon and Pokémon Go bringing love to Gen I again, I also find re-releases of Gen I Pokémon again, which is great to fill up the ones I missed, although I prefer their original release.

I have no strong feelings over Gen VII, but these are Tomy figures after all, so the quality is nice. It’s hard to part with these, so I’ve decided to keep them for now, although that might change in the future.