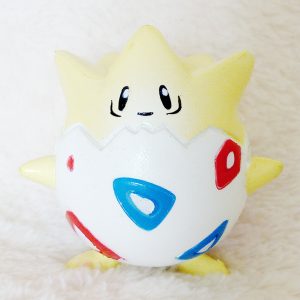 The Pocket Monster Collection, MonCollé or simply Tomy figures are small figures that are highly collectable. The series has been running from the 90s and is still running now. They have been distributed worldwide and have seen various releases and re-releases in various packs. They come often in “toy sets” and are therefor generally found in generic toy stores and supermarkets instead of the more niche geek shops. In Japan these figures come also in stand alone packs.

In this blog post you’ll find all the Gen II / Johto region Pokémon I own. As my favourite are from Gen I, you won’t find many here. But I do like a couple of Gen II so I’m keeping them and list them here.

The Tomy figures of Pokémon are my favourite. I’m still trying to catch them all of Gen I. However, there are a few of Gen II I have a soft spot for, and have acquired them over the years due to them being in multipacks with Gen I Pokémon or they came in lots.

The figures I currently own are below. All photo’s are my own of my own figures and no stock photos were used. They are shot in natural light, mostly right after sunrise and right before sunset or on a cloudy day, to avoid harsh light and shadows. As you can see, not all my figures are in perfect condition. 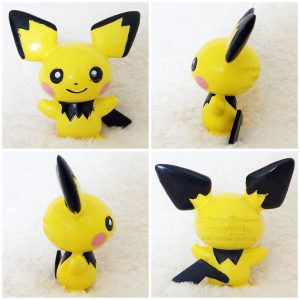 This Pichu was released in 2009 and came in a toy pack “Evolution line” with its evolutions from the Pokémon Black & White line which I purchased in 2013~2014 in the UK. It has a nice gloss over it.

The branding is on the back of his head in dented font and says: ©Nintendo / Pokémon 2009 TOMY MADE IN CHINA. 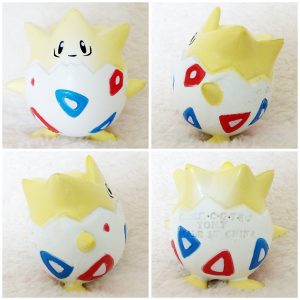 This Togepi is from the 90s. It has an airbrushed look to it and is glossy.

It came in a Movie 5-pack with battle discs that included Alakazam, Mewtwo, Staryu and Seel.

I do find the first release from the 90s still the best. They look so unique with their airbrushed look and high gloss. It gave it more of a watercolour look which is closer to Ken Sugimori’s art. Over time, the Pokémon started to look more like their animated counterpart rather than the game, and the game itself started to look more like the animation as well. The figures lost their nice gloss, and feel cheaper because of it. I even feel their paint jobs are getting worse. Still, I love them.

Because Pikachu is often paired with other Pokémon, I end up with Pokémon from different Generations that I care less for. However, there are several in Gen II I do like.

Because of eggs, baby Pokémon were now introduced. I didn’t like the idea of Pichu at first, the anime had shown smaller Pikachu before, and it didn’t make sense that a common Pokémon like Pikachu, was not known to have a prior evolution. But the Pichu Bros short movies made me fall in love with Pichu. I gained it through a Pikachu pack.

Gen II was also always considered a sequel to Gen I, unlike the other Generations. I therefor feel these were close enough to Gen I, and probably would have been made in were circumstances different back then.  Hence I have some love for Gen II.