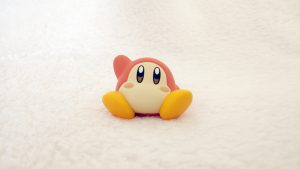 This is a small figure of Waddle Dee part of the Gashapon serie of Kirby Desktop Helpers. 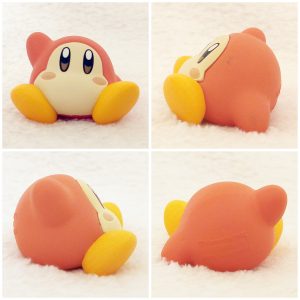 It is a small figure meant to go on your desktop and “help”. Waddle Dee however is probably the worst help in this series, and just stands on the side and helps Kirby hold up a Business Card.

The first Kirby holds a pen (or battery?). The second Kirby holds a Business Card (or photo?). Waddle Dee can team up here and stand on the other side. The third Kirby has assuming a magnet in his star and will hold paperclips. Meta Knight can hold rubber bands on his sword.

I love Tomy figures. I mostly have Pokémon ones, but other figures are equally nice! I also love Gashapons. They are cute, small and usually cheap. All the things I love!

I got a couple of Desktop Helpers from Pokémon, but didn’t realise Nintendo / Tomy did them of other series too. I saw these in my favourite geeky shop in Newcastle, and like always, ended up buying a few Gashapons. Of this series I was only really interested in the Waddle Dee though.

I like Waddle Dee. He is cute and iconic. The Kirby poses in this series reminded me of the Tsumu Tsumu set I have, so didn’t felt the need to buy more of these Kirby, and I’m not a fan of Meta Knight. This Waddle Dee though doesn’t seem like an obvious Desktop Helper either, and more like a decorative figure. All the better for me!

So Waddle Dee now sits in the game room with the other Kirby. He’s really cute and well made, as to be expected from T-Arts.

Got any more details / information you think I should add? Or did I get something wrong? Do you own the same figure or have the set? Do you agree or disagree with my findings? Let me know in the comments below!