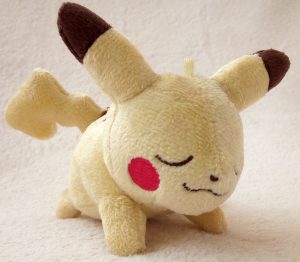 This is a small sleeping Pikachu plush from the  I ♡ Pikachu line.  One of my favourite Pokémon merchandise lines to date. This particular one is the small, sleeping version that came on a ball chain. 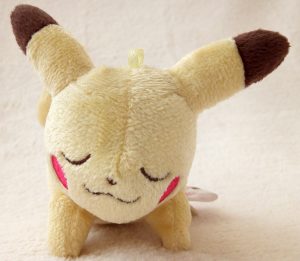 It has a relaxed sleeping face, but unlike its bigger cousin its closed eyes point downwards. It has the same closed, happy “3” mouth, and its ears are perked upwards. 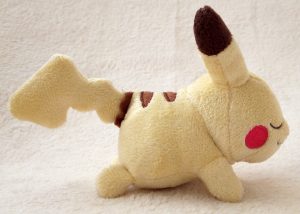 The plush is 4″ long (from nose to butt) and has a soft, smooth texture with pastel colours. This means its iconic yellow and red cheeks are of a softer colour, and the black eyes, nose, mouth and tip of its ears are a soft brown much like on its tail and back stripes. It has a small satin ribbon looped at the top of his head that had a ball chain attached to it, so you can use it as a keychain (I removed it the ball chain though). 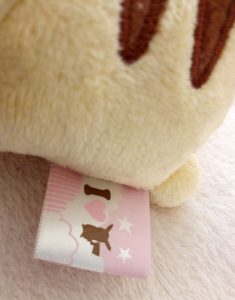 The tush tag is the same size as on the bigger ones, so can look quite big on the small plush. It is pink with a dreamy, cloud and starry background. It has the  I ♡ Pikachu logo on it, to indicate its line. Behind it is a much smaller Banpresto Tush Tag with the year 2012 on it.

I absolutely adore the I ♡ Pikachu line due to its cute pastel colours and soft nature. I prefer the bigger fluffier ones, but the cute smooth small ones are good too!

This guy was a gift from my boyfriend, who apparently searched really long to find this fellow as he knows how much I like cute, pastel and sleeping Pikachu.

He isn’t as fuzzy and therefor soft as his bigger counterparts, but still looks adorable. The 4″ plush is quite big for a keychain, but small for a plush.

Its pose slightly bothers me, as it seems to be standing rather than laying, and its ears are perked up. It looks like it is smelling something with its eyes closed, rather than asleep (which is still cute though!). The closed eyes downwards tells me its in a deeper sleep than its big cousin with upwards closed eyes, yet the pose makes me think it is way more alert and awake. But that is just a personal pet peeve I guess!

I have taken the ball chain off as I would never use this cutie as a keychain in fear of it getting dirty or damaged. Instead it sleeps comfy in the Sleeping Chu pile in my bedroom.

There are still some cute Pikachu in this line I would like to add to my collection so if you have some for sale you can always shoot me a message.