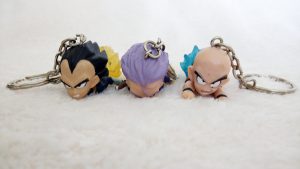 These are keychains of Dragon Ball Z characters flying. These are probably bootlegs, but I haven’t seen a legit version of these. These appear to be from the Android Saga.

As a young teen I bought everything Vegeta, so somehow I also acquired this lot of keychains with a flying Vegeta, Future Trunks and Krillin. I believe there is also a Piccolo. I can’t find anything about them, apart from the fact they come from China. I have a strong reason to believe these are bootleg figures, but I couldn’t find a legit version of these. 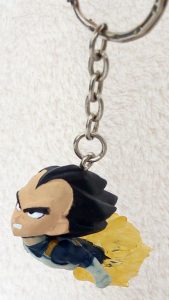 Vegeta wears his armour made by Bulma which seems to be in a darker shade than usual. He has a yellow ki around his legs. He grits his teeth and looks angry. 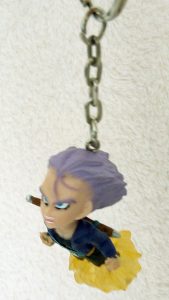 Future Trunks wears his trademark purple capsule corp. jacket and carries his sword. He has a yellow ki around his legs. He looks angry and seems to shout. 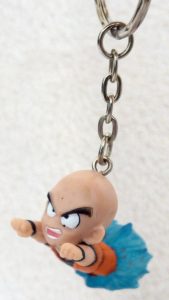 Krillin wears his orange and blue gi from Turtle School. He’s still bald. He holds his arms forward as he flies and has a blue ki around his legs. He looks angry and seems to shout.

I loved Dragon Ball Z from the start as an early teen but there was so little to find back then. Then the internet became a thing and before I knew it I had discovered eBay! I bought loads of things, including this bundle.

I didn’t have any flying characters, and thought they looked cool and unique. Anything Vegeta and Trunks was cool in my book.

However, I started downsizing and been looking more for quality than quantity now. Lately I also find my Dragon Ball purchases gravitating to more mundane poses rather than the fighting ones. Although flying isn’t too bad, they all look angry (I suppose that’s standard for Vegeta though). It’s like there is too much power fighting / stances in the Dragon Ball world. My favourite Akira Toriyama drawings are also the ones you hardly see in the show itself, and portray more mundane actions.

I find the quality very lacking of these, the painting is sloppy and the colours are dark. Even the key chain feels cheap. I considered just using them, however, as a keychain, they are awful as they are very pointy! The chain is also attached to their head, so they topple as if flying upwards instead of straight, something that just irks me.

I also think I got a lot of fakies as an unaware child, so these are going first obviously. However, I couldn’t find a legit version of these, so I decided to put them up on the blog anyway.

I no longer have these in my possession.