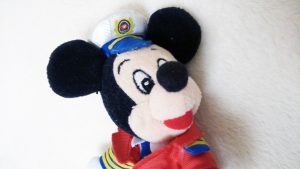 This is a Mickey Mouse from the Walt Disney World park in Florida.  He wears a captain outfit from the Disney Cruise line and has magnetic gripping hands. 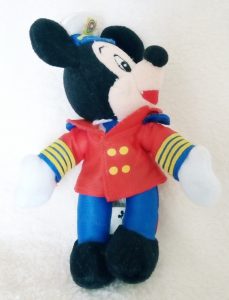 It’s a tiny plush that’s about 15 cm tall. He is in a standing position but can’t stand on his own. He has magnets in his hands to grip things. Mickey wears a red captain jacket with blue and yellow details. Underneath it he wears a white shirt and blue tie. He has blue pants with a red line on the side, made from the same silky material as the jacket. On top of his head he wears a captain’s hat. 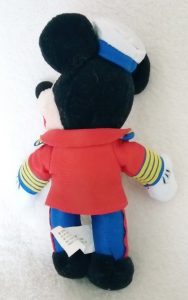 Mickey has no tail. His hands, feet and head are made of a soft plush material with a short pile. The only hard thing on this plush are the magnets inside the hands. 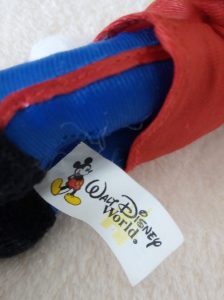 I got his Mickey from a co-worker who was getting rid of some toys. As it was an official Disney plush, I couldn’t say no. I’m not sure if these are from the park or from the cruises, but I do know it’s from the Disney Cruise line of around 2009 I believe. The tush tag says Walt Disney World though.

It has sat on our fridge for a while, holding notes for us. It’s a cute magnet which is functional, but it was making the fridge look a bit busy with the other magnets we got.

Having a clear out, I’ve decided to let this one go. Had I been on a cruise and gotten it as a souvenir I would have probably been more attached to it, but seeing it was just a freebie I don’t feel much for this one. Nothing to fault on the plush though, but I can’t keep everything and I got others I rather keep.