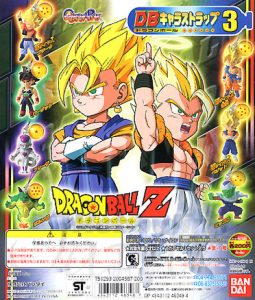 This is a Gashapon set of Dragon Ball Z chibi characters with a Dragonball on a dangler made by Bandai. The characters vary. The series is called Chara Strap and there are several parts to it, this one being number 3. Each character comes with a Dragonball, and all 7 complete a set.

Apart from Vegetto and Gogeta, all could be placed in the Namek / Frieza Saga. They are all super deformed, or Chibi, and about 3 heads tall. Their head is the only body part that is too big proportion wise, their hands and feet fit their bodies. The Dragonballs are semi-transparant, with a matt finish. The stars are printed on and not inside the balls. 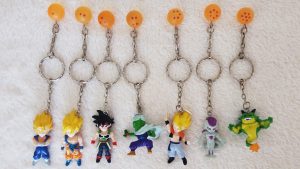 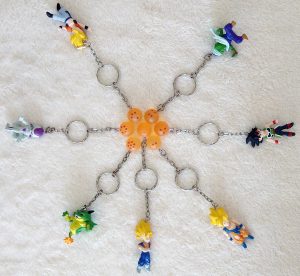 All 7 keychains together form a full set of Dragonballs.

The ones I got have keychains instead of phone straps / swings / danglers. The Dragonball numbers also go with different characters than on the promotional image. It is possible the previous owner (as I got them secondhand) put them on keychains, and mixed up the Dragonballs. It is also possible these are potential bootleg figures, but I don’t have another one to compare it with. 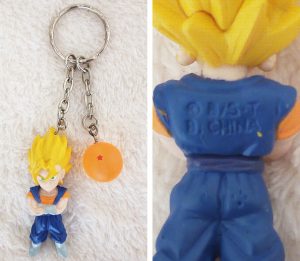 Vegetto comes with the 1 star Dragonball. He has his arms crossed and looks confident. He is a Super Saiyan. The branding is on his back across his shoulder blades. It reads:
© B / S · T
B. CHINA
The typical 4 dots logo of Bandai is located on his right bum cheek. 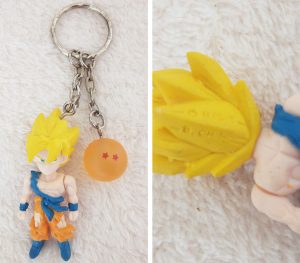 Goku comes with the 2 star Dragonball. His clothes are ripped and he is almost fully bare chested. His arms are down and he looks stern. He is a Super Saiyan. The branding is on the back of his hair. It reads:
© B / S · T
B. CHINA
The typical 4 dots logo of Bandai is located on his left shoulder blade. 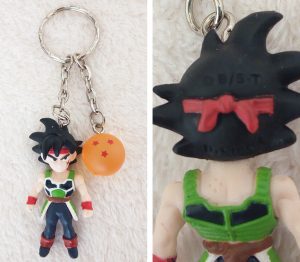 Bardock comes with the 3 star Dragonball. His arms are down and he looks stern. He is wearing the red bandanna and has the scar across his cheek. The branding is on the back of his hair. It reads:
© B / S · T
B. CHINA
The typical 4 dots logo of Bandai is located on his left shoulder blade.
This is my favourite of the set. 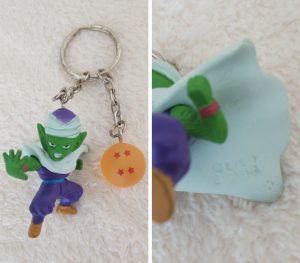 Piccolo comes with the 4 star Dragonball. Unlike the other characters, he is in an attacking pose. His knees are bent and his arm is forward, palm stretched, as if shooting a beam. His cape is shaped dynamically in the opposite direction, as if there is force behind the beam. He has an angry expression. He wears his weighted hat and shoulder armour with cape. The branding is on the inside of his cape in the corner. It reads:
© B / S · T
B. CHINA
The typical 4 dots logo of Bandai is located in the right most tip / corner of the cape next to the branding. 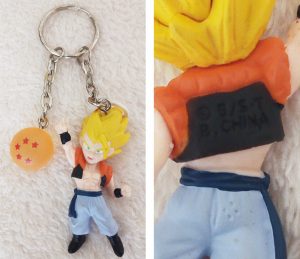 Gogeta comes with the 5 star Dragonball. He has one arm raised, with his index finger pointing upwards, ready for an attack. He looks excited. He is a Super Saiyan. The branding is on his back. It reads:
© B / S · T
B. CHINA
The typical 4 dots logo of Bandai is located on his right bum cheek. 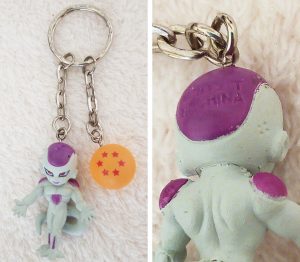 Frieza comes with the 6 star Dragonball. His arms are downwards, palms extended and pointing forward. He has that come at me look about him and at the same time he seems ready to attack, blasting from his hands. He looks confident. He is in his 4th form. The branding is on the back of his head. It reads:
© B / S · T
B. CHINA
The typical 4 dots logo of Bandai is located on the right of his head, behind his ear. 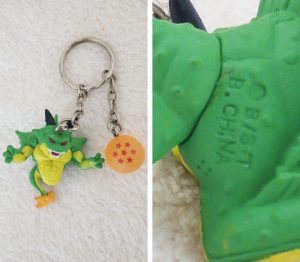 Porunga comes with the 7 star Dragonball. He comes forth from a burst of light at the tip of his tail, and grows outwards in a powerful dragon. The branding is on his back, on the left side. It reads:
© B / S · T
B. CHINA
The typical 4 dots logo of Bandai is located just below the branding.

I loved Dragon Ball Z from the start as an early teen but there was so little to find back then. Then the internet became a thing and before I knew it I had discovered eBay! I bought loads of things, including this set, probably because it had Bardock in it. I liked the Saiyans but there wasn’t much to find from them apart from of course the main cast.

I used to love Chibi figures. They looked cute! Nowadays though I prefer more accurate proportions. These are 3 heads though so look a bit nicer than 2 heads Chibi in my opinion.

As I started downsizing I’ve been looking more for quality than quantity now. Lately I also find my Dragon Ball purchases gravitating to more mundane poses rather than the fighting ones. It’s like there is too much power fighting / stances in the Dragon Ball world. My favourite Akira Toriyama drawings are also the ones you hardly see in the show itself, and portray more mundane actions. I’m also not a big fan of keychains, or chibis anymore. And these could potentially be bootlegs, which I do not want in my collection if I can help it.

That said, the quality is surprisingly good considering what they are. The paint is ok and they come across as sturdy. Of all of them, I find Frieza the sloppiest looking. However, I wouldn’t use them myself as keychains as I’d be scared to break or ruin them. They can also be quite pointy due to the spiky hair.

I’m letting these go as I’m downsizing, but I still wanted to catalogue them here for fellow collectors and for preservation. I no longer own these keychains.