The Corocoroid series of capsule toys features products where the capsule is part of the product. In this case with Kirby, it’s the main body. The Kirby series comes in 2 parts with each having 4 different variants. This is the second part.

In my case I didn’t get it out of a capsule machine, but out of a blind box. 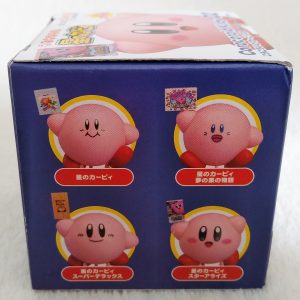 The box features all the different Kirby’s you can get. 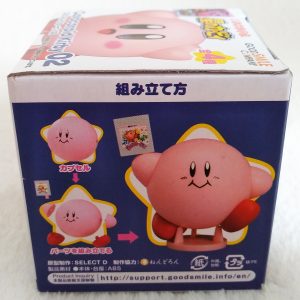 As well as the general concept of the body being the capsule. 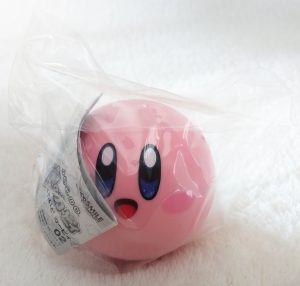 Once opened you’ll find Kirby in plastic, although I imagine it would just be the ball in a gasha machine. 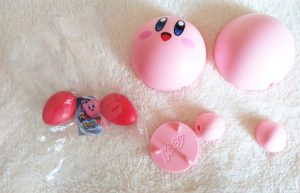 Inside the ball are all the bits to make up Kirby fully, as well as a stand.

The figure is the exact same size as the Kirby Nendoroid from Good Smile Company, so you could pose these together.

Kirby is holding the box of the Famicom game Kirby’s Adventure and his face is in the style of the Kirby of that game, using blue outlines. His feet are pointing upwards, in a sitting pose, as on the box. 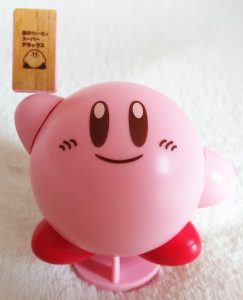 Kirby is holding the box of the Super Famicom game Kirby Super Star and his face is in the style of the Kirby of that game, using brown. His feet are flat on the floor, in a neutral standing pose, as on the box. 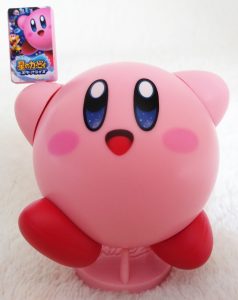 Kirby is holding the box of the Nintendo Switch game Kirby Star Allies and his face is in the style of the Kirby of that game, with little stars in his eyes. His feet are pointing forward and backward, in a jumping pose.

When I got one of the first Corocoroid Kirby series I wasn’t that impressed. A plastic ball with parts, that was hard to put together and couldn’t be posed? I rather got a normal figure. Due to the plastic and hollowness it felt cheap. Still cute though. And it being the same size as a Nendoroid is a nice touch.

But when I saw the second series, with the different Kirby and them holding their respective game, I was smitten! I love merchandise that directly ties in with the video game. Plus having them together shows a nice evolution of Kirby.

Yes, they still feel cheap. And I was disappointed to find the boxes being pink pieces you have to sticker. But I really like the concept of these. Maybe because I knew what I was getting also helped.

I got a random one at first which happened to be Kirby Star Allies. The one I wanted the least as I do not have a Switch (yet?). The other 2 I got from a shop that labels which ones are inside. Sadly they no longer had Kirby’s Dreamland. So I’m still looking out for that one.

If you like Kirby and can’t afford a Nendoroid and don’t mind non-posable, these are a great, cheaper alternative. If you like older Kirby or the games, series 2 is great. If you rather just have cute Kirby’s holding Kirby things, series 1 is more for you.

Got any more details / information? Did I get something wrong? Do you own the same figures or the full set? Let me know in the comments below!